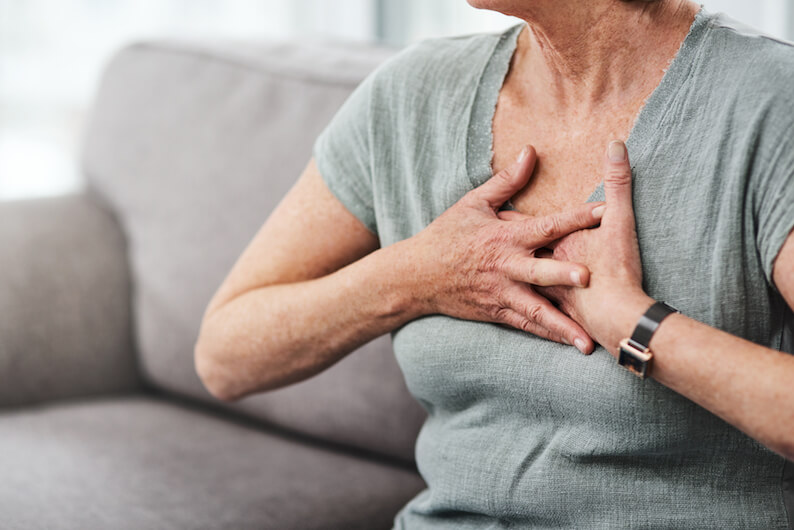 Those are some scary statistics. There used to be a misperception that women were somewhat “protected” against cardiovascular disease because of estrogen levels. That’s not entirely true and we’ll explain later. In fact, heart disease is actually considered to be more deadly in women than men.

Why is that? For one very simple reason… heart disease in women is a silent killer. Many women experience no symptoms, and if they do, those symptoms are usually either ignored or attributed to other conditions.

Family history is a risk factor for cardiovascular disease regardless of gender. Although there isn’t a single gene that causes a heart attack or heart disease, there are several genes that work together to increase your risk of developing it. So, if either of your parents suffered from heart disease, there’s a good chance you’re at risk as well.

But unlike family history that’s relevant to both men and women, there are a couple of different risk factors women don’t share with men. For example, endometriosis and polycystic ovary disease are conditions that only affect women and increase their risk of coronary heart disease.

According to research published in Circulation: Cardiovascular Quality and Outcomes, women with endometriosis are 62 percent more likely to have a heart attack, develop chest pain, or need heart procedures to open blocked arteries. And in women under 40, the statistics are even worse, with them having a 400 percent increased risk of developing coronary artery disease.

Women who experience gestational diabetes and high blood pressure during pregnancy also have an increased risk of suffering from heart disease.

The Symptoms of a Heart Attack Are Often Different for Women

Chest pain or pressure is a common heart attack symptom for both men and women, as is radiating pain down and along the shoulder and arm. However, women don’t always experience these particular symptoms, and if they do, they might be present weeks before the heart attack occurs.

Common symptoms for women include unusual fatigue, shortness of breath, sweating, and pain in the neck, back, or jaw. These symptoms often occur without warning and without any type of exertion. Some women also experience nausea and dizziness. As you can notice, many of these symptoms are common everyday ailments that could signal any number of things. So, it’s essential for women to pay close attention to their bodies and not ignore even the slightest sign or symptom. If you do experience any of these symptoms, seek medical attention. Of course, you should always have an open and honest conversation with your physician.

We mentioned earlier that it used to be believed that estrogen helps to protect women from heart disease. It does help in a sense, but it certainly doesn’t make women immune to the disease. Estrogen helps but only providing there are healthy levels. Estrogen offers the cardiovascular system many benefits, including:

Unfortunately, women lose that protective role when their estrogen levels drop during menopause or for some other reason. This is why women tend to develop heart disease 10 years later than men. The average age for a heart attack in women is 70, but 66 in men.

Heart Attacks are Harder on Women

Women generally have a greater risk of dying from a heart attack than men. In the first year after a heart attack, women are more than 50 percent more likely to die than men are. This is for a few different reasons. (Phentermine)

Women are more prone to develop a blood clot following a heart attack, which can lead to another heart attack. Women also don’t do as well as men, because when women suffer from a heart attack, many of them have untreated risk factors, such as high blood pressure and diabetes, that can cause complications.

Be Heart Healthy and Protect Yourself

In addition to paying close attention to symptoms, it’s vital that women take a proactive role in reducing their risk of heart disease. This includes living a healthy lifestyle and keeping up with regular check-ups and health screenings.

If you’re at risk, as many women are, don’t wait until it’s too late. Instead, discuss your heart risk with your doctor and create a prevention plan tailored to your health and needs. Heart disease doesn’t just affect men. Heart disease in women is a significant killer, but one that you can take steps to help protect yourself from.