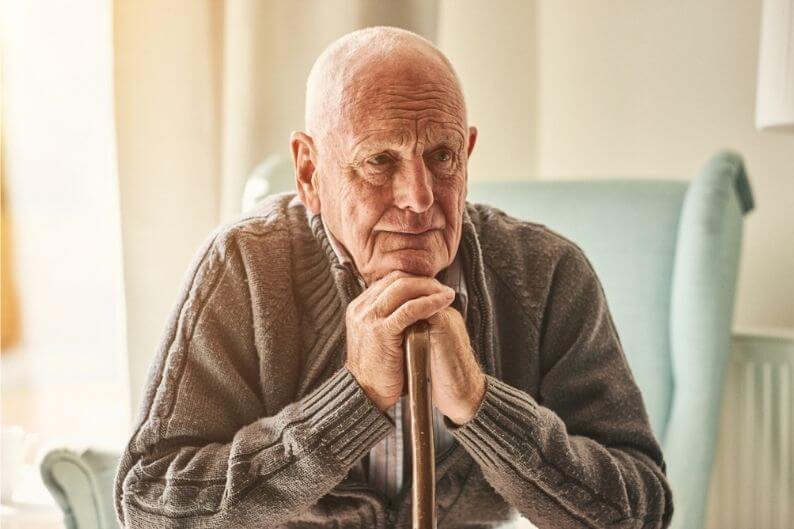 If you’ve got symptoms that are affecting the way you feel, think, or go about your daily activities, you could be suffering from depression. Depression in older adults is fairly common, but it’s not a normal part of the aging process.

Despite dealing with more health problems, studies show that older adults are actually happier than many younger people. Often times things will trigger that depression, like the death of a loved one or diagnosis of a serious illness. Some people will bounce back after an adjustment period, but others will end up dealing with some type of depression.

There are several different types of depressive disorders. Those who suffer from major depression will see many aspects of their lives impacted, like the ability to perform daily tasks, eating, sleeping, and just plain enjoying life. Major depression can happen to someone just once in their life, but many times it will happen several times throughout their life.

A second type is called a persistent depressive disorder. Someone with this type will experience a depressed mood continuously for at least two years. During that time, there will be periods of major depression with times of less severe symptoms in between.

Another fairly common type is seasonal affective disorder (SAD), which is also known as the winter blues. This disorder is tied to the changing of the seasons and most commonly affects people during the winter months. While the exact cause of SAD isn’t known, it’s believed to be the result of the shorter daylight hours impacting your body’s internal clock.

Causes and Other Risk Factors

When it comes to depression in older adults, there are quite a few things that can cause it or lead to a higher risk of a depressive disorder. Many of them have to do with significant life changes that can occur as we age.

The increase in health problems is the trigger for some people. Dealing with different illnesses, chronic conditions, constant pain, or cognitive decline is hard to handle. That’s especially true if you were to start experiencing several of those problems at once.

With many people living alone, loneliness and isolation become an issue. Having decreased mobility or losing the ability to drive can lead to fewer social interactions. There can also be a smaller social circle for older adults as they lose friends and other loved ones. Dealing with the deaths of those close to you is another cause for depression on its own.

Aside from those stress-related factors, there are biological factors to take into account.

Your genes could be working against you. Those with a family history of depression are at a higher risk of developing a disorder themselves.

In a similar vein, your personal history plays a role. If you have suffered from depression before, you are much more likely to experience it again.

There’s one more thing older adults may need to worry about. It’s called vascular depression. This condition is related to changes in the brain and body that limit blood flow. If blood flow is restricted, it will lead to less blood making it to your organs, including your brain. It can affect people who have never had depression and have no family history of depression. People with this condition may also be at risk of heart disease, stroke, or other vascular diseases.

Symptoms to Look For

You probably think of just being sad when you think of depression in older adults. That’s not necessarily the case. While sadness can be a symptom, there are many others. Those symptoms include:

If you think you may be suffering from depression, don’t worry. It can be treated. You should start by making an appointment with your doctor.

There are some medications that can cause depression as a side effect. Your doctor will be able to do an exam and help determine if one of the medicines you take could be causing the problem.

If the doctor’s exam doesn’t show any medical reasons for the depression, your next step is a psychological evaluation.

You can also do some things on your own to try to help the condition.

The first thing is staying connected. Getting out and doing things, spending time with friends, volunteering, or joining a support group can be a big help. If you can’t get out of the house, at least try staying connected digitally by using things like video calls to get some interaction with other people.

Sometimes depression in older adults can come from not feeling useful, so finding some kind of purpose helps. Try to learn a new skill, get involved in your community, pick up a new craft, or just focus on things that you can still do instead of things you used to be able to do.

Being healthy in and of itself can improve your mood, too. Getting regular exercise, eating a healthy diet, and getting quality sleep are great ideas. Your body will be getting a boost, which will also help your mind.

The most important thing to know if you’re dealing with depression is that YOU CAN GET HELP. It’s not hopeless. Don’t isolate yourself. Call your doctor to set up an appointment.

If you need immediate help, you should call 911, go to the emergency room, or ask a friend or family member for help. If you don’t have someone to talk to, you can call the National Suicide Prevention Lifeline at 1-800-273-8255.