How to Talk to Someone With Dementia 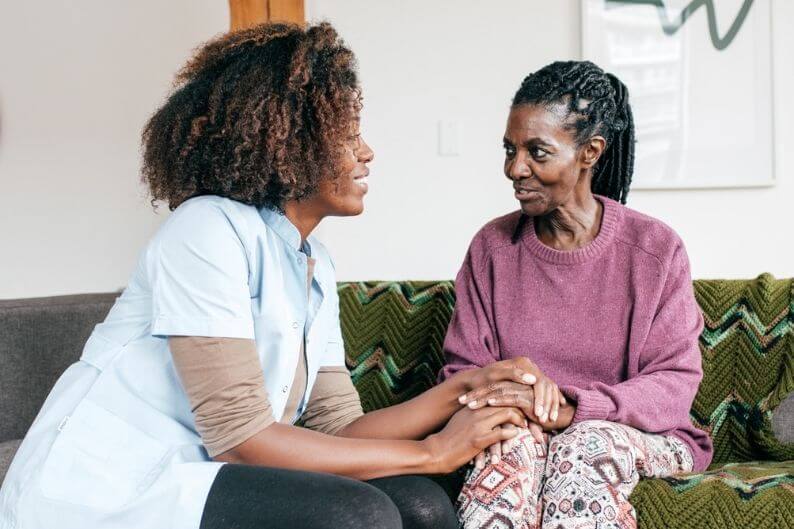 Seeing a loved one experience the effects of Alzheimer’s or another form of dementia can be difficult to deal with. The changes can make it difficult to communicate effectively. There are certain strategies you have to learn about how to talk to someone with dementia.

It may seem like a lost cause if you’ve already tried to work through these kinds of issues, but there is hope. Whether you’ve got a family member or friend that is in the beginning stages of dementia or you’re trying to learn how to communicate with someone who’s in a more advanced stage of the disease, you’ll find the information here you need to have a breakthrough.

Alzheimer’s and other forms of dementia impact the areas of the brain that are associated with how we learn new information, at least until a patient reaches an advanced stage of the disease. That’s why those dealing with the disease might be able to remember stories from when they were young but not that a family member visited them the day before.

When it comes to communication, you’ll notice different impacts depending on the stage of the disease. The Alzheimer’s Association says these are the communication effects you can expect to see as the disease progresses:

The changes range from things that are mildly inconvenient to things that make it extremely difficult to communicate at all. A caregiver or loved one will have to practice extreme patience and understanding to make it work. There are several strategies you can use to help bridge the gap. Other tactics should be avoided due to the likelihood of just escalating the problem.

Things You Should Do

The key to successfully communicating with a dementia patient is keeping things simple and in the present. Use these best practices and stay patient for your best chances at success.

Keep it Simple and Focused

With the way dementia impacts thought, you don’t want to be talking about several different things at once. Keeping your conversation focused on one thing at a time will help make it easier.

Even better, use short sentences and basic words, too. This is no time to be expanding your vocabulary. While you don’t want to speak down to this person, you still want to try to make it as easy as possible for them to follow the conversation. Using big, uncommonly used words won’t help the situation.

To help keep your friend or loved one’s mind on the conversation, try to limit distractions. Turn of the TV or radio if you’re in somebody’s home. If you’re out and about, try to find a table or area that’s a little more secluded from the busiest areas of the location.

Stick to What Works

It may take a little trial and error to get to this point, but find something that works, and stick with it.

You have to remember the disease being battled doesn’t define this person. They are still someone who you know a lot about and what their strengths and weaknesses are. Play to their strengths to help facilitate communication.

To do this, you’ll need to think about things your loved one knew long ago. You’re using their long-term memory to start the conversation (remember, it’s the short-term memory that’s first affected by dementia). Get them to tell you stories. It could be things like what they liked to do when they were a kid or maybe a memory brought back by looking at an old photo album.

Music is another common method of bringing up memories. That certain song can take you back to a particular moment in your life.

One more option is to talk about what they see and hear at that moment. Sitting outside? Talk about the weather, the pretty colors and wonderful smells of nearby flowers, or the sounds of the world around you.

If the disease is in an advanced stage, you may have to switch to non-verbal methods of communication. Even if they aren’t very responsive, it is still beneficial to keep communicating in some way.

Body language becomes even more important at this stage. While it’s important in earlier stages, any negative tone, sudden movement, or tense facial expression can make them upset. They may not be able to understand the words you’re saying, so your demeanor could be all they’re picking up.

Touch can be very powerful in this stage, too. Make sure it’s appropriate and not unwanted, but holding hands or putting your arm around your loved one can help them feel wanted and reassured.

Using physical gestures and eye contact is crucial, as well. For example, even though you are saying, “Let’s go for a walk,” it might not register with them what the words mean. When you say it, also stand up while keeping eye contact and motion for them to follow.

Things You Should NOT Do

There are a lot of things you may do in regular conversation that you should avoid when you’re learning how to talk to someone with dementia. Many times it’s something you don’t see as a problem but can actually be a trigger for an Alzheimer’s patient.

Stay Away From Short-Term Memory

If you’re going to visit in the afternoon, you can’t go with your usual talking point of, “Well what have you been up to today?” Someone with dementia may not remember that. At best they will have to think really hard to retrace their steps, which could frustrate them. Remember, stick with the present, what’s going on around them or what they’re doing right now.

Your friend or loved one may be having communication problems, but that doesn’t mean you should resort to primal grunts or baby-talk to try to get a message across. It accomplishes nothing and just demeans the patient.

For those who are in earlier stages of dementia, don’t tell them they can’t do something. You’re likely to just offend and upset them. It’s all about your phrasing.

For example, don’t say, “You can’t go get groceries by yourself.” Try to reframe it a little. Saying, “You may get lost trying to get back home, and I don’t want you to get hurt,” can ease the conversation a little bit. Instead of making it seem like a confrontation, you’re structuring the conversation in a way where they may realize they have been forgetting things like where they live lately and they could use a little help.

This could be one of the first things you notice happening with a newly diagnosed dementia patient. They might start having trouble finding the right words for a common item. Often times you’ll see them point at something and just not be able to get the right word out.

Another sign is calling something the wrong word. Maybe it’s something like them asking you to pass them the telephone when they’re pointing at the television remote. Instead of correcting them, just pass the remote. It’s not going to solve anything, and it will likely only embarrass or upset them in some way.

If you’ve ever been around someone with dementia, you may have noticed them repeating the same question often. You should just answer the question and not remind them they just asked you that a few minutes ago. Sometimes they just forgot, sometimes it’s their way of asking about something they’re still concerned about. Do what you can to fix that concern, but sometimes all you can do is answer the question again.

Learning how to talk to someone with dementia is all about practicing patience and developing an understanding with that person. Whether you’re a caretaker or a loved one of the patient, you can figure out what works and what doesn’t.

If you’re just starting to notice some memory-related things with someone you know, keep in mind some memory loss is normal. It’s just a regular part of aging. Keep an eye out for signs it may be a more serious condition, and always keep regular appointments with a physician to monitor the symptoms.